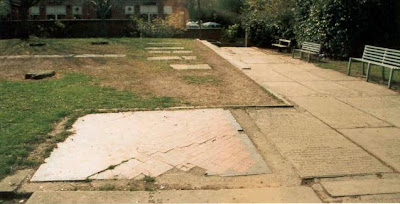 "O passenger, pray list and catch
Our sighs and piteous groans,
Half stifled in this jumbled patch
Of wrenched memorial stones!

"We late-lamented, resting here,
Are mixed to human jam,
And each to each exclaims in fear,
'I know not which I am!'

"The wicked people have annexed
The verses on the good;
A roaring drunkard sports the text
Teetotal Tommy should!

"Where we are huddled none can trace,
And if our names remain,
They pave some path or p-ing place
Where we have never lain!

"There's not a modest maiden elf
But dreads the final Trumpet,
Lest half of her should rise herself,
And half some local strumpet!

"From restorations of Thy fane,
From smoothings of Thy sward,
From zealous Churchmen's pick and plane
Deliver us O Lord! Amen!"

"The Levelled Churchyard" was written in 1882 while Hardy and Emma were living in Winborne, and it appears to refer specifically to Winborne Minster. The manuscript originally bore a subtitle: "W------- Minster". Michael Millgate explains that Hardy, while cooperating with the Society for the Protection of Ancient Buildings, "offered, in particular, to keep a watchful eye on work being done on Winborne Minster" The germ of the poem -- with the scattered parts of the disinterred bodies -- may have come from an experience twenty years earlier. In The Early Life, Hardy recounts being involved with the overseeing of churchyards that were being cut through by railroad companies. His employer, Arthur Blomfield, described "returning from visiting the site on which all the bodies were said by the railway companies to be reinterred; but there appeared to be nothing deposited, the surface of the ground quite level as before" In order to make sure the bodies were actually buried properly, Hardy was asked to check one such job at irregular intervals. One evening, accompanied by Blomfield, he watched as a coffin fell apart. Out dropped a skeleton and two skulls. When years later he met Arthur Blomfield again, "among the latter's first words were: 'Do you remember how we found the man with two heads at St. Pancras?'"