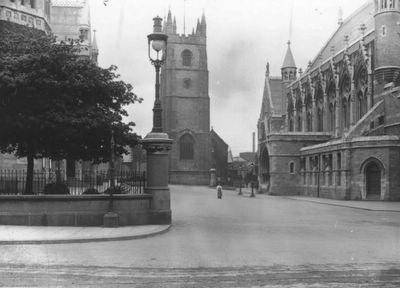 (Saint Andrew's Church as Hardy would have known it)

Nobody says: Ah, that is the place
Where chanced, in the hollow of years ago,
What none of the Three Towns cared to know--
The birth of a little girl of grace -
The sweetest the house saw, first or last;
Yet it was so
On that day long past.

Nobody thinks: There, there she lay
In a room by the Hoe, like the bud of a flower,
And listened, just after the bedtime hour,
To the stammering chimes that used to play
The quaint Old Hundred-and-Thirteenth tune
In Saint Andrew's tower
Night, morn, and noon.

Nobody calls to mind that here
Upon Boterel Hill, where the carters skid,
With cheeks whose airy flush outbid
Fresh fruit in bloom, and free of fear,
She cantered down, as if she must fall
(Though she never did),
To the charm of all.

Nay: one there is to whom these things,
That nobody else's mind calls back,
Have a savour that scenes in being lack,
And a presence more than the actual brings;
To whom to-day is beneaped and stale,
And its urgent clack
But a vapid tale.

The Curtains now are Drawn (Song) 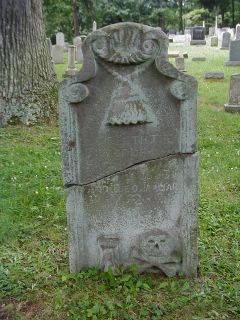 I
The curtains now are drawn,
And the spindrift strikes the glass,
Blown up the jagged pass
By the surly salt sou'-west,
And the sneering glare is gone
Behind the yonder crest,
While she sings to me:

II
I stand here in the rain,
With its smite upon her stone,
And the grasses that have grown
Over women, children, men,
And their texts that "Life is vain";
But I hear the notes as when
Once she sang to me:

Posted by Arborfield at 6:00 am No comments:

In a Cathedral City 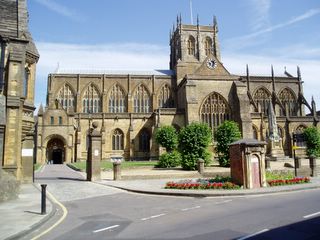 These people have not heard your name;
No loungers in this placid place
Have helped to bruit your beauty's fame.

The grey Cathedral, towards whose face
Bend eyes untold, has met not yours;
Your shade has never swept its base,

Your form has never darked its doors,
Nor have your faultless feet once thrown
A pensive pit-pat on its floors.

Along the street to maids well known
Blithe lovers hum their tender airs,
But in your praise voice not a tone.

- Since nought bespeaks you here, or bears,
As I, your imprint through and through,
Here might I rest, till my heart shares
The spot's unconsciousness of you! 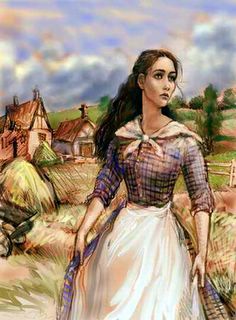 Little head against my shoulder,
Shy at first, then somewhat bolder,
And up-eyed;
Till she, with a timid quaver,
Yielded to the kiss I gave her;
But, she sighed.

That there mingled with her feeling
Some sad thought she was concealing
It implied.
- Not that she had ceased to love me,
None on earth she set above me;
But she sighed.

She could not disguise a passion,
Dread, or doubt, in weakest fashion
If she tried:
Nothing seemed to hold us sundered,
Hearts were victors; so I wondered
Why she sighed.

Posted by Arborfield at 7:24 am No comments: 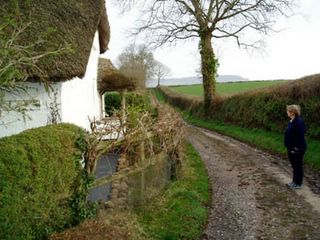 It filled but a minute. But was there ever
A time of such quality, since or before,
In that hill's story? To one mind never,
Though it has been climbed, foot-swift, foot-sore,
By thousands more.

Primaeval rocks form the road's steep border,
And much have they faced there, first and last,
Of the transitory in Earth's long order;
But what they record in colour and cast
Is--that we two passed.

And to me, though Time's unflinching rigour,
In mindless rote, has ruled from sight
The substance now, one phantom figure
Remains on the slope, as when that night
Saw us alight.

I look and see it there, shrinking, shrinking,
I look back at it amid the rain
For the very last time; for my sand is sinking,
And I shall traverse old love's domain
Never again. 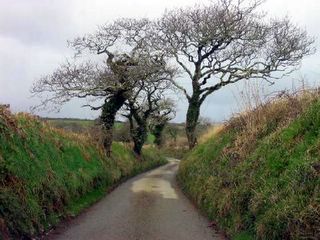 As I drive to the junction of lane and highway,
And the drizzle bedrenches the waggonette,
I look behind at the fading byway,
And see on its slope, now glistening wet,
Distinctly yet

Myself and a girlish form benighted
In dry March weather. We climb the road
Beside a chaise. We had just alighted
To ease the sturdy pony's load
When he sighed and slowed.

What we did as we climbed, and what we talked of
Matters not much, nor to what it led, -
Something that life will not be balked of
Without rude reason till hope is dead,
And feeling fled.
(tbc)

Posted by Arborfield at 5:21 pm No comments:

A dream or no 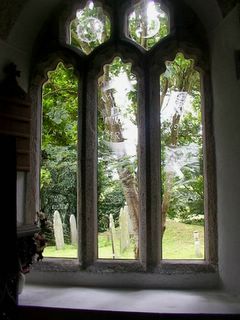 Why go to Saint-Juliot? What's Juliot to me?
I was but made fancy
By some necromancy
That much of my life claims the spot as its key.

Yes. I have had dreams of that place in the West,
And a maiden abiding
Thereat as in hiding;
Fair-eyed and white-shouldered, broad-browed and brown-tressed.

And of how, coastward bound on a night long ago,
There lonely I found her,
The sea-birds around her,
And other than nigh things uncaring to know.

So sweet her life there (in my thought has it seemed)
That quickly she drew me
To take her unto me,
And lodge her long years with me. Such have I dreamed.

But nought of that maid from Saint-Juliot I see;
Can she ever have been here,
And shed her life's sheen here,
The woman I thought a long housemate with me?

Does there even a place like Saint-Juliot exist?
Or a Vallency Valley
With stream and leafed alley,
Or Beeny, or Bos with its flounce flinging mist?

The picture above is of the new Hardy window in St Juliot church, North Cornwall, dedicated in July 2003. The window consists of scenes from the romance of Hardy and Emma Gifford, his first wife - these scenes taking place in the area around St Juliot, including Beeny Cliff and the Valency river valley. These scenes are frequently referred to in Hardy's poetry, particularly in those poems he wrote in response to Emma's death.

Because of the light coming in through the engraved glass, it is impossible for photographs to do justice to how beautiful this window is. My advice is, go to St Juliot and see. Go to Boscastle, take the coast road north, and follow the signs for St Juliot "Old Rectory" (Emma's old house). The church is half a mile past the rectory. 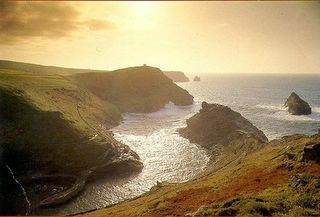 "It never looks like summer here
On Beeny by the sea."
But though she saw its look as drear,
Summer it seemed to me.

It never looks like summer now
Whatever weather's there;
But ah, it cannot anyhow,
On Beeny or elsewhere! 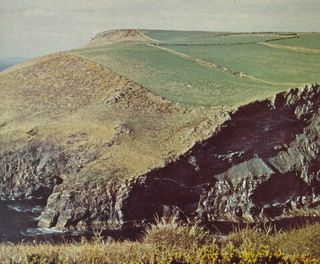 By an ill fate, the force downwards of her bound, added to his own weight, had been too much for the block of quartz upon which his feet depended. It was, indeed, originally an igneous protrusion into the enormous masses of black strata, which had since been worn away from the sides of the alien fragment by centuries of frost and rain, and now left it without much support.

It moved. Knight seized a tuft of sea-pink with each hand.

The quartz rock which had been his salvation was worse than useless now. It rolled over, out of sight, and away into the same nether sky that had engulfed the telescope.

One of the tufts by which he held came out at the root, and Knight began to follow the quartz. It was a terrible moment. Elfride uttered a low wild wail of agony, bowed her head, and covered her face with her hands.

Between the turf-covered slope and the gigantic perpendicular rock intervened a weather-worn series of jagged edges, forming a face yet steeper than the former slope. As he slowly slid inch by inch upon these, Knight made a last desperate dash at the lowest tuft of vegetation - the last outlying knot of starved herbage ere the rock appeared in all its bareness. It arrested his further descent. Knight was now literally suspended by his arms; but the incline of the brow being what engineers would call about a quarter in one, it was sufficient to relieve his arms of a portion of his weight, but was very far from offering an adequately flat face to support him.

In spite of this dreadful tension of body and mind, Knight found time for a moment of thankfulness. Elfride was safe.

She lay on her side above him--her fingers clasped. Seeing him again steady, she jumped upon her feet.

'Now, if I can only save you by running for help!' she cried. 'Oh, I would have died instead! Why did you try so hard to deliver me?' And she turned away wildly to run for assistance.

'Elfride, how long will it take you to run to Endelstow and back?'

'Three-quarters of an hour.'

'That won't do; my hands will not hold out ten minutes. And is there nobody nearer?'

'No; unless a chance passer may happen to be.'

'He would have nothing with him that could save me. Is there a pole or stick of any kind on the common?'

She gazed around. The common was bare of everything but heather and grass.

A minute - perhaps more time - was passed in mute thought by both. On a sudden the blank and helpless agony left her face. She vanished over the bank from his sight.

Knight felt himself in the presence of a personalized loneliness.

Posted by Arborfield at 8:00 am No comments: